Arts and Craft beers make it big in cans

The remarkable story of how craft breweries stand out from the crowd with highly individual branded cans.

Over the past few years, two things have become abundantly clear in the beer industry. First, craft is king: many brewers are now focusing on flavour and authenticity. And secondly, the beverage can is fast becoming a showpiece with many of these same brewers adopting it as their packaging of choice. The use of beverage cans by craft brewers has grown in leaps and bounds since Oskar Blues Brewery first canned its now iconic Dale’s Pale Ale back in 2002. 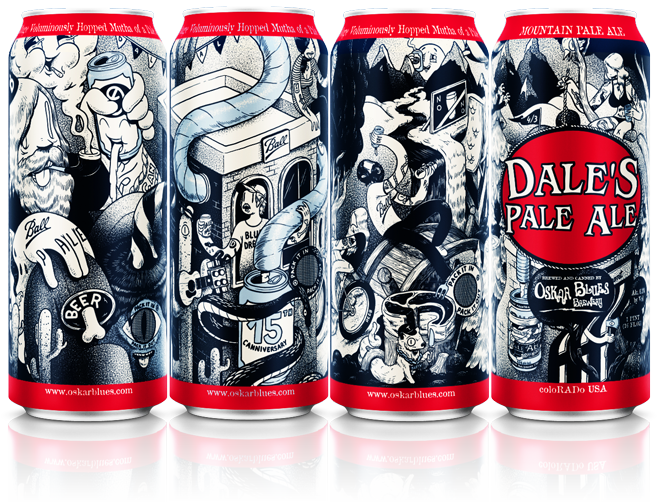 But whereas they and other early adopters could once rely on the novelty of their beer being available in a can, that notion has now faded with the widespread acceptance they once fought so hard to achieve. There are now literally hundreds of beers in both bottles and cans on store shelves, and a brewery hoping to stand out needs not only to have a strong marketing but a well-developed brand identity. One that’s unique and tells a story, and that connects the consumer to the craftsmen who brew the beer.

A Texas-based design firm called Helms Workshop has been helping US brewers survive the frenzied world of craft beer for several years now. In fact since they started with Austin Beerworks in 2010, the company has helped create an identity for over half a dozen small breweries. Two of their most recent projects, California’s Modern Times Beer and Minnesota’s Bauhaus Brewing Company fully embrace the intimate interaction a consumer has with their can by using the entire surface area for communication, thereby offering a ‘360-degree experience’.

Yet while canned craft beer has existed for well over a decade in the USA, the European market for craft beer in a can did not exist until a few years ago. An early pioneer was the Italian/Swiss brewer, Bad Attitude.

The brewery began canning in 2010 and released several beers with bold names and eye-catching designs. Their Kurt Pale Ale featured an image of Nirvana’s Kurt Cobain and The Dude Oat Soda featured a likeness of Jeff Bridges’ famous character in the classic cult movie The Big Lebowski. Things are a little different today however as a growing number of craft brewers in Europe are releasing canned beers that feature artwork and designs worthy of the prized liquid they hold.

When it comes to remarkable brand identities, few breweries in the world can outshine Denmark’s Mikkeller. Since 2006, this small Copenhagen-based brewery has been churning out new – and often times unique – beers at a dizzying pace. In fact the brewery has developed something of a cult following, in part due to its fun, engaging label artwork created by US-based artist Keith Shore. The brewery recently made the decision to add cans to its formerly all-bottle line up and again asked Shore to help. He duly delivered creating expressive and colourful designs that wrap around the can and are each, in their own way, a work of art. For example, his ‘Wit Fit’ can design (for white beer) features a comical portrayal of a man getting his wheat ‘fix’, while the Simcoe IPA design hits the ‘hophead’ mark with a man who has a giant hop for a brain.

Another brewery that has created a unique ‘can’ experience is London’s Beavertown Brewery. Beavertown is the old Cockney name given to the historic De Beauvoir area of the city where the brewery first fired up its brew kettle in 2011. Like many brewers’ cans, each Beavertown design is a billboard promoting its brand. While the designs vary from beer to beer: for example Gamma Ray American IPA and Smog Rocket Smoked Porter have labels based on space-themed designs, there is a cohesiveness to the range, no doubt helped by the fact that they have one creative director (Nick Dwyer) managing (and often the illustrator of) their designs. Just like at Mikkeller, each design wraps fully around the can and is visually stimulating enough to turn heads. In fact Beavertown’s newest addition Lupoloid IPA, a 6.7% ABV India Pale Ale, even has a pink top to the can.

There is no doubt, these standout designs help beers win the hearts and minds of consumers and distinguish the brand in a busy market space. Today though, brewers that can their beers are in good company. So much so that an increasing number of festivals and competitions are being organised entirely for them. In Britain for example, the Society of Independent Brewers and Can Makers have been running an Indie Beer Can Festival since 2014. This event encourages independent breweries to submit samples, whether canned or not. In the most recent event (in 2016), an initial shortlist was created from 131 beers, and after blind taste tests, thirteen beers made it to the finals. The best of show winner was a beer from the Windsor & Eton Brewery, called Uprising Treason. It also won the Best Ale and Best New Beer to Can prizes.

In the USA, the AmeriCAN Canned Craft Beer Festival is already into its 7th edition. In May 2017 – the latest event – a group of over 30 certified beer judges gathered in Phoenix to sample and vote for their favourite brews. By the end of the event they had sampled more than 300 beers and nominated Gold, Silver and Bronze winners across nine different categories. At the event itself, craft brewers poured samples for thirsty festival goers directly from cans into festival goers’ tasting cups: special lidless 8 oz (236 ml) cans! As the world’s largest celebration of canned craft beer, it’s a shining example of the consideration and respect now given to the humble beer can.

Beer Can Festivals around the world:

The future is bright and colourful

The beer can has come a long way since the days of uninspired designs and bland lagers. Many of today’s cans feature artwork by very talented artists on the outside, which complements the complex beer brewed by very talented brewers on the inside. Marketing and branding have become every bit as important to a small brewery as selecting the right hops and malts. It can mean the difference between being good and being exceptional. Great branding provides consumers with a chance to feel connected to the brewery and for a strong relationship to be formed. With more incredible designs springing up all the time, the future for craft beer in cans is bright.